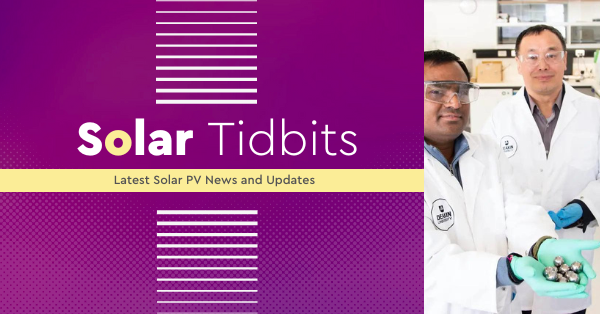 In this week’s issue of Solar Tidbits: (1) The Rooftop Solar Rules have been Updated to Allow for Multiple Installers (2) Wind and Solar are the Cheapest Reliable Energy Options by a “Country Mile”, says AEMO (3) Australian Researchers make a Breakthrough in Hydrogen Storage Photo Credit: One Step Off The Grid

The Clean Energy Regulator has announced a minor but significant change to the rules governing rooftop solar installation under the federal government’s SRES rebate scheme, allowing multiple installers to complete a job.

In an update to the requirements for solar installations, the CER states that rooftop PV systems may now be carried out by multiple installers, which was previously not permitted – but only under strict conditions.

First, the CER requires written notification detailing the fill-in installers and their credentials, as well as an explanation of why they were required. The regulator will then consider the PV system’s eligibility for Small-scale Technology Certificates (STCs) on a case-by-case basis.

More about this article: https://bit.ly/3Bi8vji

Wind and Solar are the Cheapest Reliable Energy Options by a “Country Mile”, says AEMO The Australian Energy Market Operator has reiterated its belief that “firmed renewables” – wind and solar backed up by storage and new transmission – are clearly the cheapest reliable power option “by a country mile.”

On Tuesday, CEO Daniel Westerman told the Australian Clean Energy Summit that the recent CSIRO GenCost report showed the low cost of “firmed” or “integrated” renewables, as well as the global energy crisis, were compelling reasons to accelerate the transition.

Westerman said, “We know that we’re likely to see 60 per cent of today’s coal generation gone by the end of the decade. So in fact, these (recent energy) events have simply underscored the need to accelerate Australia’s transition to the cheapest form of reliable electricity,”.

More about this article: https://bit.ly/3J9TjXm Australian researchers have developed a novel method for safely separating, storing, and transporting large amounts of gas, which could be the missing piece of the renewable hydrogen puzzle.

Renewable hydrogen plays a significant role in Australia’s net zero emissions plans, particularly in the difficult-to-decarbonize sectors of industry and heavy transport. However, storing and transporting large quantities of gases for practical use remains a significant challenge.

Deakin University’s Institute for Frontier Materials (IFM) in Melbourne claims to have discovered a new mechanochemical method of separating and storing gases that is safe, uses a fraction of the energy used by traditional methods and produces no waste.

More about this article: https://bit.ly/3cOIL41